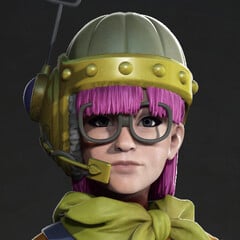 I am a 3D character artist with 6 years experience in the game and animation industry. I received a bachelors degree at the University of Central Florida in Game Design. While going to school I worked with a few studios in the simulation industry as a 3D artist. I worked on educational training games for the military and medical sector. After graduating from my university, I worked for 2 years at Hi-Rez studios as a 3D character artist on Smite. After this, I worked at Rooster Teeth as a character modeler for RWBY season 7. I am currently working freelance for multiple companies as a 3D character artist. If you are interested in working with me than please contact me by email for work inquiries and availability.